Even after my last article about PHP and node.js benchmarking, my search for the holy grail of performance truth still continues. However, I do understand now that pitting PHP running on apache against a stand-alone node was a bit unfair with PHP for it was limited by what the apache configuration could handle. 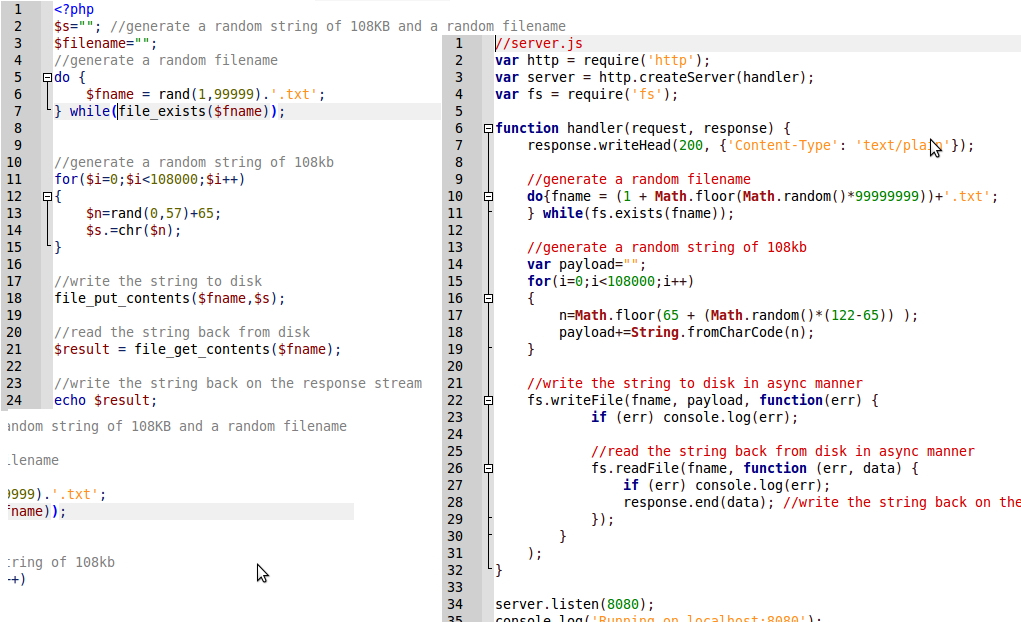 No, this time I went with nginx, a light and performance oriented server that was specifically designed to solve the C10K problem from the ground-up. And who better than PHP-FPM, the enhanced Fastcgi process manager that implements asynchronous features (at least in theory) to take on node.js. node.js is the one server that implements all its features primarily using callbacks in javascript, and thus drastically improvising performance by leveraging the benefits of functional programming (again, in theory).

I used the same code I had used earlier but did a small improvement to it so that the random filenames generated for performing I/O are unique:

And here is the Javascript version:

So, what happens when we run a piece of web application code performing async I/O for two thousand times (with two hundred concurrent) using a tool like apache-bench? Who is faster - PHP-FPM or node.js? Here is the answer.

So, moral of the story is that even the latest and greatest of PHP world falls behind node.js (though by a much smaller margin than before). Now, I do understand that PHP's market is very large, and with so many opensource CMSes like wordpress, mediawiki and drupal already powered by PHP, it is quite difficult to shake PHP's market share in the near future.

On the other hand, with the performance advantage that node.js offers, its a very lucrative option for startups small businesses that don't have the funding to develop high-end enterprise apps in say, Java or SAP. More importantly, if tommorrow I were to given a task of developing a performance-driven app, is there one reason why I should not write it in node.js and go for PHP-FPM instead? Some food for thought. Comments are Welcome!