In the good old days, USB file-transfer between your laptop and smart-phone used to happen through the much easier "mass storage" mode which works just as if you had inserted an external pen-drive. But these days, most smart-phones and tablets have shifted to the MTP (Media Transfer Protocol).

Unlike a mass storage device, the MTP device doesn't show up in the usual /media/<user>/<device-label> folder in a linux distro which makes backup automation or other file transfer tasks more difficult as you cannot simply hard-code this path and write bash scripts based on that.

This isn't possible in case of MTP because the label is dynamically determined using two important bits of information called BusID and DeviceID, and the file-system path works out to be something like this:

In this example, 001 is the BusID whereas 010 is the DeviceID. You can find these two values by running the lsusb command before and after the MTP device is inserted: 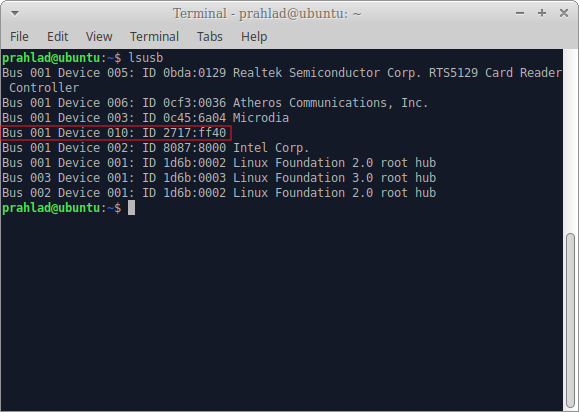 However, these two numbers (BusID and DeviceID) are dynamically determined depending on when and where you inserted the MTP device. Hence, if you are writing an automation script for backup, etc., you need to calculate it using other two static bits of information which are always constant for your device, they are called VendorID and ProductID.

In this example (for my Redmi Y2 phone), they happen to be 2717:ff40 (displayed right next to the BusID and DeviceID in above screen). Now that you have these two static bits of information which are always going to be in a given format (VendorID:ProductID), you can pass it to a bash function to determine the path dynamically:

In above script, $redmi_y2 variable is hard-coded which is then passed to the get_mtp_path bash function to determine the actual path which is then stored in the $folder variable.

Now that you have $folder, you can do anything with it. For example, you can use rsync to backup your smart-phone pics in the DCIM folder to your laptop:

Alternatively, you can run a normal backup of your Documents folder to your smart-phone:

The possibilities of this are immense!